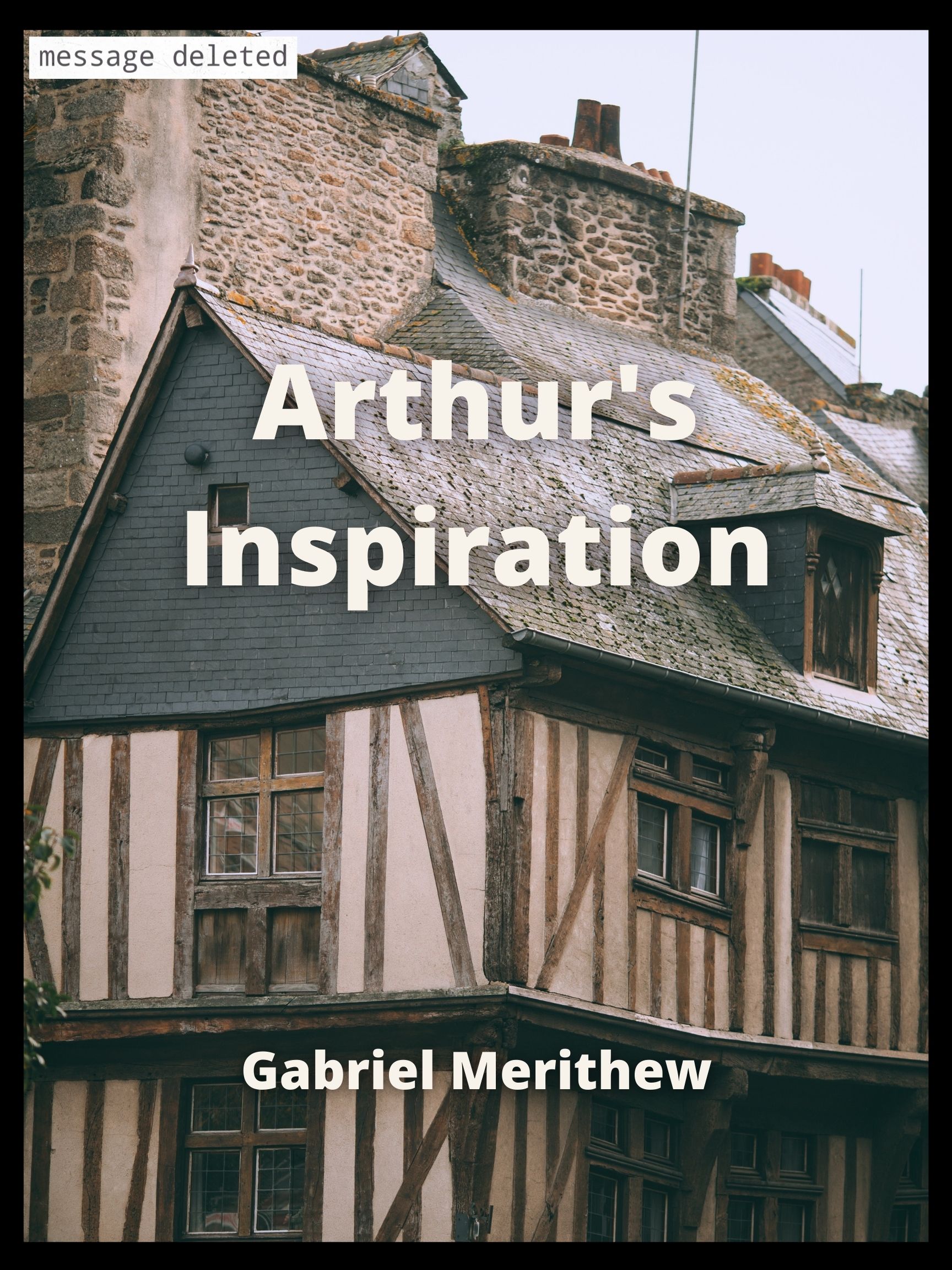 Long ago at the end of a twisty street sat a tall house with strangely shaped windows, and in this house lived a grumpy old man. Arthur was his name and he was an author. A famous author who once wrote works that continued to inspire generations long after they were conceived. Even these days, some time after his last brown hairs had turned grey, he’d still occasionally spot a bright-eyed admirer standing near his rusty front gate, gazing up at the strangely shaped window to his study, just hoping to catch a glimpse of their hero. He knew that those people wanted autographs, a quote, or maybe even a hug, but as he told his wife over and over again, he was getting too old for fans. But this was a lie and they both knew it.

The true reason that Arthur avoided his fans was that he hadn’t written a word in over a year now, and it was preying heavily on his mind. Until he found the next amazing idea that would magically turn itself into a story, those admirers would have to leave his front gate without getting what they desired. Arthur felt for them, he did, but in his mind ignoring them was the only option, and it would stay that way for the time being. So on this beautiful afternoon, he stepped away from the window in his third-floor study and let the curtains fall back into place, starving the room of the brilliant sunlight and plunging it into darkness. He spent the rest of the day reading by candlelight.

The next morning started like any other. Arthur got out of bed and walked over to the window in his study. It was a particularly strange window, shaped a bit like a rhinoceros. But to him, it was just a window and much like the day before, he opted to keep the curtains shut. In front of the rhinoceros-window sat his desk, the same desk at which he’d written every word of his famous works. So much award-winning writing had been completed at this desk that he now felt a twinge of intimidation as he sat down and picked up his pen. But the blissful certainty of habit quickly eased his mind. He proceeded to spend the next hour reclining in his comfy chair, whistling, and twirling his pen in his fingers. He knew that if he at least stayed at his desk for an hour or so, his wife would think that he’d at least tried to write and she wouldn’t be upset with him. So he did just that, sitting there not writing a word because he honestly had no intention of doing so.

After the hour was up, he stopped twirling his pen and got up out of his comfy chair with a dignified grunt, and walked briskly toward the door, already mapping out his upcoming enormously delicious and deliciously enormous breakfast in his mind. But before he could leave the room, Arthur heard an odd “WHUMP” on the ceiling. He stopped, looked up quizzically, wondered if he was imagining things, and then remembered the word “breakfast”, turned his back, and once again reached for the doorknob. But then came a second louder “WHUMP” directly overhead. Arthur bounced on the balls of his feet. He might’ve jumped, but he’d had a few too many enormously delicious and deliciously enormous breakfasts lately, so he stayed planted firmly on the floor. Arthur stared at the ceiling for a lengthy moment, waiting for another whump, but none came. Still, the peculiarity and random nature of the two whumps intrigued him, so after a lame but brief mental struggle, he decided to abandon the prospect of a morning meal for the moment and exited the room, ascending the stairs to the attic. He couldn’t remember the last time he’d been up there. It seemed to grow colder as he walked up the steps, and they creaked worryingly underneath his heft. He’d lived in this house his whole life and used to be afraid of the attic when he was a little boy, but that fear had apparently been replaced with a sense of excitement that invigorated him. By the time he reached the top of the stairs, he was feeling a bit winded.

The long attic was dimly lit by two small windows on each end, one shaped a bit like a human tooth and the other kind of like a crooked wizard’s hat. They were fairly large windows and should’ve provided sufficient light, but they were covered in a thin layer of aged grime, so any light that did get through was soft and grey, and barely illuminated the vast assortment of antique furniture and knick-knacks that lay strewn haphazardly across the room. There were desks, tables, chairs, ottomans, bookshelves, and cardboard boxes, all crammed with forgotten items that might’ve fetched quite the price if put up for auction. Arthur breathed in the stale air and received a very stuffy taste of the attic that made his throat tickle.

He moved through the room, each floorboard protesting squeakily as he slowly meandered from one to another, stopping occasionally to inspect an interesting trinket from his past that caught his eye. Once he’d reached the opposite end of the room and become more accustomed to his environment, he remembered why he’d gone up to the attic in the first place. He stood up straight and craned his neck to see over the mountainous piles of memorabilia as he scanned the room for any reasonable explanation to the whumps. And in that exact moment, as he stood there scanning the room, he heard it again. Louder than ever. “WHUMP”. Coming from right beside him under an old oak dining table.

Arthur let out an audible exclamation of surprise and with his heart pounding in his chest, knelt down and peered under the table. Staring back at him, its adorable little head peeking up over the rim of a cardboard box, was Gem. Startled for a second time in a span of seconds, Arthur bonked his head on the table but then smiled happily at the puppet doll in front of him.

He reached out and picked up Gem, dusting him off. The doll’s painted smile was the same as it had always been and it brought warmth to Arthur’s heart, making him feel like he was twelve years old again. “Right back at you Arthur!” A warm and gentle voice spoke.

Arthur yelped and dropped Gem onto the dusty floor.

“If my insides weren’t made of stuffing, that would’ve really hurt.” The voice was coming from Gem.

“Uhh…” Arthur didn’t know what to say. Gem was actually talking to him. There was no other explanation. “I’m sorry”.

“I’m perfectly fine of course, but would you mind picking me up? This floor is very dusty.” Said Gem.

“Of course.” Arthur leaned over and picked Gem up off the floor and stared bewildered at the doll. “You talk?”

“Yes, I’m not supposed to talk to you, or humans in general, but I’m just so glad to see you again that I couldn’t help myself!” Gem’s painted mouth and button eyes stayed motionless as he spoke. He didn’t seem to be capable of any animation.

“Well… Uhh…” Arthur struggled to locate words. “I’m glad to see you again as well, but… You talk!” This time it was more of a statement.

“I’m enjoying it immensely after being silent for all these years, so if you don’t mind, I’d like to make the most of this opportunity and tell you a story I’ve been dying to share since you were a little boy.”

“By all means.” Arthur said politely, still baffled by what was happening.

Over the next several minutes, Arthur listened to Gem tell him a story and by the end, tears of sadness, joy, and love welled up in his eyes. He bade Gem farewell, placing him back into the dusty old cardboard box upon Gem’s request, and closed the box. Arthur walked quickly to the stairs, his mind reeling with what had just happened. Gem’s final words rang in his ears, “And don’t look back.”

In a daze, he immediately returned to his bedroom, ripped open the curtains, and sat down in his comfy chair at his desk. He picked up his pen. It was still warm from earlier. Without hesitation, he began to write. The words seemed to spill out of him in a flood. Every emotion he’d been avoiding, every thought, every idea poured onto the page. As he wrote, tears fell from his cheeks and smeared the ink in places. But he didn’t care because it felt better than anything he’d experienced in a long, long time.

That night in front of an enormously delicious and deliciously enormous dinner, feeling immensely happy, Arthur had the first real conversation with his wife in what felt like years.

“What happened to you, Arthur?” She smiled with slight apprehension at him from across the table. “Would this have anything to do with you talking to yourself in the attic this morning?”